The Various Official Flavors of the Jar Test: Evaluating the Efficacy of Volatile Corrosion Inhibitors (VCI)

The use of anti-corrosive packaging materials functionalized with volatile corrosion inhibitors (VCI) to preserve processed metal parts is a critical component of any sound corrosion management program.  Evaluating the efficacy of VCI packaging to provide off-contact protection of steel surfaces is commonly performed in the laboratory using the Vapor-phase Inhibition Ability (VIA) test, also known as the Jar test.  Currently, four distinct internationally recognized standard methods for the VIA test have been documented, including the MIL STD 3010 – 4031, NACE TM0208, German TL 8135 – 002, and JIS Z 1542 (film specific) standards1-4.  While conceptually identical, these standard methods are distinguished by important technical details that can produce disparate results.  This white paper summarizes the similarities and differences between these methods and further comments on their potential advantages and limitations.

In general, the Jar test reactors used for the experiments are similarly constructed across the standard methods.  Low carbon, cylindrical steel specimens with water break-free surfaces are suspended from the top of enclosed glass containers (1L) via rubber stoppers.  Test VCI film samples are also suspended inside the containers, proximal to but not touching the steel specimens.  At some point during the test, a glycerin / water solution is placed at the bottom of the container to produce a 90% RH environment.   A critical difference distinguishing the German TL method from the others is the absence of a hollow aluminum tube through which cold water is delivered to the backside of the steel specimen to induce condensation on the polished surface.  The ramifications of omitting this element are significant as further discussed below. Ultimately for all methods, the amount of corrosion appearing on the water-break free surface is compared to that for a VCI-free control reactor.   For a graphical illustration of the Jar test reactor design see the official documentation for any of the standards.

To further appreciate the differences between the standard methods first consider in greater detail the U.S. Military standard, MIL STD 3010 – 4031.  As shown in figure 1, the method is comprised of three distinct stages: 1) Metal Specimen Preparation, 2) Jar Reactor Parameters and 3) Corrosion Assessment.  In the first stage, cold drawn low carbon steel specimens are hand polished with coarse (240 grit) and then fine (400 grit) sandpaper, and then dry wiped with surgical gauze to remove residual sandpaper grit.  Next, the steel specimens are swabbed with boiling methanol, and then solvent cleaned in two boiling methanol baths in succession to remove any lingering organic residue.  Finally, the polished buttons are dried under clean air and stored in a desiccation chamber until use.  In the second stage, the specimens are placed in Jar reactors containing 10mL of an aqueous glycerin (26% v/v) solution, which are then incubated at 75°F and 90% RH for 20 hours.  To induce condensation on the polished metal surface, the hollow aluminum tube connected to the backside of the metal specimen is filled with ice-cold water and the whole assembly is further incubated for an additional 3 hours.  In stage 3, the polished metal surfaces are visually evaluated for corrosion under 10X magnification and assigned a grade corresponding to the number of corrosion spots identified. 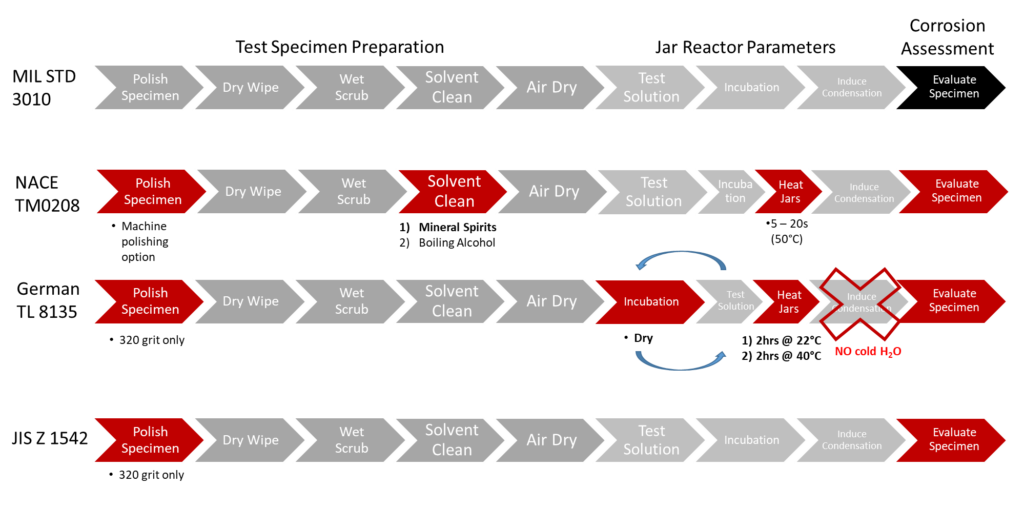 Compared to the MIL STD 3010 – 4031 method, the NACE TM0208 standard varies in four key areas, including how the steel surface can be polished, how the steel surface is solvent cleaned, how condensation is induced, and how the surface corrosion on the steel specimen is evaluated (figure 2).  With regards to specimen polishing, the NACE method is unique in that it is the only one that stipulates parameters for polishing steel surfaces both by hand and by machine.  Whether by lathe, drill press, or contra-rotational wheels, machine polishing delivers higher throughput and greater polishing consistency compared to hand polishing methods, albeit at the expense of producing steel surfaces with lower sensitivity to corrosive events.  The NACE method also uses a more stringent solvent cleaning protocol than the MIL STD standard as it involves bathing the polished specimens in boiling mineral spirits prior to consecutive alcohol rinses.  This additional treatment offers a more thorough removal of any residual soil contaminants deposited while handling the steel specimen during the current and previous tests, thus generating greater consistency between the specimen test surfaces.  Also, to induce a more aggressive corrosive environment on the steel surfaces than that generated by the MIL STD standard, the NACE method adds a heating step after the 20hr wet conditioning period, which further elevates the relative humidity inside the Jar reactors.  The condensation thus formed on the steel surfaces upon subsequent exposure to cold water occurs more quickly, producing a more prolonged corrosive environment compared to that of the MIL STD.  Due in part to its more aggressive nature, the NACE method uses a less rigorous grading system to evaluate surface corrosion, relying primarily on the naked eye to estimate the extent of protected surface area.  In the NACE metric, increasing grades ranging from 0 to 4 correlate with increased corrosion protection, rather than an increase in corrosion spots as defined in the MIL STD method.  Thus while a grade of 3 represents good corrosion protection in the NACE TM0208 standard, it indicates the opposite for the MIL STD 3010 – 4031 method.

Like the NACE method, the German Military TL 8135 Jar test standard also varies considerably from the MIL STD (figure 2).  These differences range from how the steel specimen is polished and conditioned, to the Jar reactor parameters used to generate condensate on the steel test surface.  For example, the German method specifies abrading the steel specimens with coarser sandpaper (320 grit) than the MIL STD method, which generates a slightly rougher test surface with an increased corrosion potential.  Where this difference is likely of little significance, the alternative protocols described by the German method for conditioning the Jar reactors and inducing condensation on the steel specimens are far more consequential to the test outcome. Unlike the MIL STD method where the Jar reactors are conditioned for 20hrs in a humid environment (90% RH), the German test calls for dry-conditioning the Jars for the same period of time.  Only after this conditioning period is the glycerin/water solution added to the Jar reactors, which are further incubated at 22°C and 40°C in succession (2hrs each) to generate a humid environment (90% RH).  Without any additional measures for inducing condensation on the steel surfaces, such as cold water exposure as described in the MIL STD standard, the specimens are air-dried and evaluated for corrosion.  While using the same numerical system as the NACE standard for grading corrosion protection, the German TL 8135 method is typically less corrosive due to reduced exposure time to humid conditions and the absence of induced condensation on the steel specimen surfaces.

Finally, the Japanese Industrial Standard (JIS Z 1542) jar test method is largely identical to the MIL STD 3010 – 4031 standard, differing only in how steel surfaces are polished and ultimately graded for corrosion protection (figure 2).  Like the German method, JIS Z 1542 calls for polishing steel surfaces with 320 grit sandpaper, which again yields a slightly rougher surface with more area for corrosion events to occur. However, once assembled into the Jar reactors, the steel specimens are processed in the same manner as in the MIL STD.  That is, they are conditioned in a 90% RH environment for 20hrs and then exposed to cold water to induce condensation.  Importantly, like the MIL STD method, the JIS Z 1542 standard does not include heating the Jar reactors prior to adding cold water to the backside of the steel specimens.  As a result, the rate of condensate formation on the steel surfaces is likely slowed, reducing the time of condensate exposure and yielding a less corrosive environment than would otherwise be produced if a heating step were included (see NACE TM0208 method).

Compared to the corrosion grading systems used by the other methods, the one described within JIS Z 1542 is more rigorous and complex.  Based on three levels of observation, the system first determines whether corrosion spots are detectable on the test specimens by the naked eye.  Where spots are observed (grades 0 – 2), the percentage of corroded surface area relative to that of the control steel specimens is measured.  This is done photographically by enlarging a photo of the steel surface to a 160mm diameter and then counting the number of 10mm x 10mm sections containing corrosion.  From this analysis, the extent of corrosion protection, the so-called ‘Corrosion Inhibitor Ability Percentage’ is determined and is used to define grade 0 (≤ 50%), grade 1 (50% – 90%), and grade 2 (> 90%).  Where spots are not observable with the naked eye, specimen surfaces are further evaluated under 10X magnification and assigned grades based on the total number of spots identified: grade 3 (≥4), grade 4 (1-3), grade 5 (0).  Notably, while the increased analytical rigor of the JIS Z 1542 grading system reduces subjectivity, it also significantly increases the labor required for evaluating corrosion protection.

While the various Jar test standards described herein provide useful methods for measuring the vapor-phase corrosion inhibition potential of VCI packaging materials, the intensity of the corrosive environment they generate, and their bias towards specific VCI mechanisms vary.    For example, the NACE TM0208 method combines wet-conditioning, Jar reactor heating, and cold water-induced condensation steps to produce a highly corrosive environment that favors VCI chemistries delivered via water vapor.  Lacking the Jar reactor heating step, the MIL STD 3010 – 4031 and JIS Z 1542 methods are often slightly less corrosive than the NACE method while favoring similar VCI chemistries.  Conversely, the German method, which prescribes dry-conditioning of the steel surfaces and lacks a water-induced condensation step, typically generates the least corrosive environment that also favors VCI chemistries operating via moisture-independent mechanisms.   Although these differences can make it difficult to compare the results between methods, they also complement each other to provide coverage over a more expansive chemical space of VCI technologies.

Finally, the comparisons made here are between the official standards as published by their respective internationally recognized bodies.  In practice, testing laboratories often make modifications in response to seasonal effects, among other variables, that impact the extent of corrosion generated on control steel surfaces.  For example, when conducting the NACE standard it is not uncommon to extend the time Jar reactors are heated during the drier winter months so as to generate similar results to those of the summer months.  Similarly, to boost the corrosive potential of the German TL 8135 test, an additional step that induces condensation much like the MIL STD method is commonly added.  Specifically, cold water is delivered to the backside of the steel specimen via pipettes penetrating the rubber stopper, which are replaced every 15 minutes during the final heating step at 40°C 5.  Regardless of the specific standard or modified standard used, the VIA provides a relatively quick and powerful tool for evaluating the efficacy of VCI packaging materials to protect freshly polished steel surfaces.